Skip to content
You are here
Home > Opinion pieces > Yes, motorcycles use less fuel than cars, here’s the proof

Motorcycles consume less fuel than cars. You may think this is obvious, because they are smaller, weigh less and have smaller engines. But do they really? We are going to find out.

It isn’t as simple as it sounds. Often we hear people complaining – or boasting – about a car that uses less fuel than a motorcycle. Well, if you compare the official type approval test figures of a Diesel car with the real-life figures of a big motorcycle, especially when that is used by a rider who likes to go fast, you shouldn’t be surprised then when the bike ‘beats’ the car. However, when you compare you should do that with things that are comparable: apples with apples and oranges with oranges, not apples with oranges. And comparing apples with oranges is just what is being done all the time with motorcycles and cars. Even when you compare type approval test figures of cars with those of motorcycles you compare two different things, because there are big differences between the test cycles for cars and motorcycles. And even with the same test cycle there would be differences because of the different build, nature and use of the vehicles. Does this mean we cannot compare? No! Thanks to the German website www.spritmonitor.de we can.

There are several ways to select cars and motorcycles to compare with each other. You can look at size, engine capacity, price, weight, type of vehicle, etc. The first two or three choices aren’t too difficult, but sooner or later questions arise, about the comparability, about relevance (how many are sold, ride around?), about actuality (is it still in production, if not how long is it out production?). We decided not to go there, but to focus on the ten best sold cars and motorcycles in Europe in 2015. From the ten best sold cars we took both the petrol and the Diesel version and we looked at the fuel consumption as registered in Spritmonitor.de.

The 10 best sold motorcycles were:

The 10 best sold cars were: 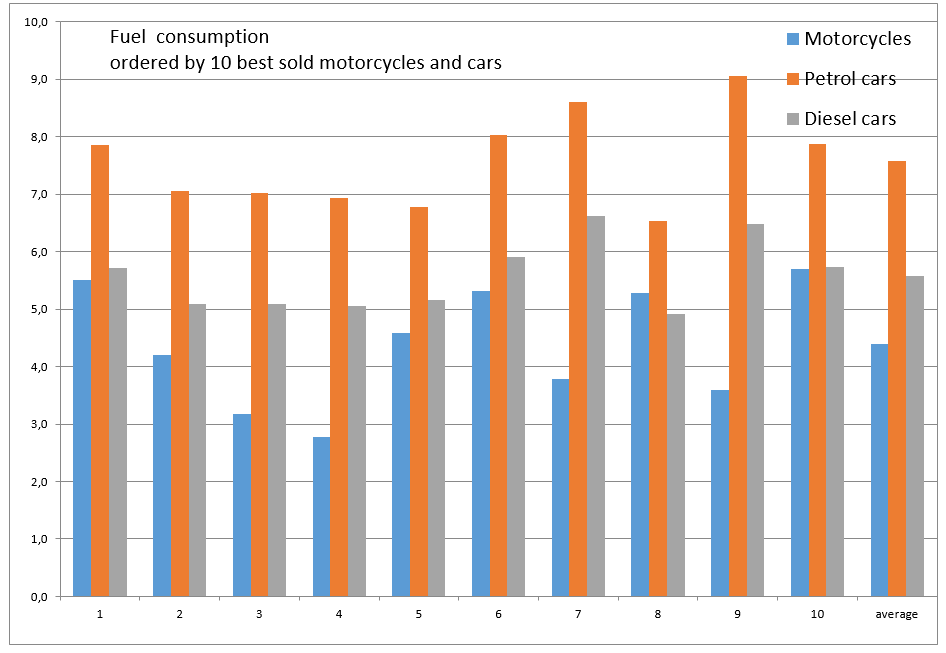 In real-life the motorbike uses over 1 l/100km less than a Diesel car and over 3 l/100km less than petrol cars. Because fuel consumption and the emission of carbon dioxide (CO2) are related, motorbikes have also less CO2 emission.

CO2 is one of the greenhouse gasses and is therefore seen as an important contributor to the climate change. This does not say anything about other emissions. According to a study from the Joint Research Centre of the European Commission in 2013 motorcycles in general have a, compared to cars, high emission of carbon monoxide (CO) and hydrocarbons (HC).

From 2017 all new sold motorcycles will have to comply to these Euro 4 standards. The Euro standards for motorcycles should not be confused with the Euro standards for cars and cannot be compared with each other, because of different values, different test cycles and completely different vehicles. The present standard for cars is Euro 6, which is implemented in September 2014. For motorcycles the present standard is Euro 4, which is implemented in January 2016.