Skip to content
You are here
Home > Member news > Greek motorcycle institute: ‘Take away the negative image of helmets in Greece’

In Greece wearing a helmet is still considered a choice by many motorcyclists, even though it has been mandatory since 1992. The Hellenic Institution of Motorcycle ‘Motothesis’ has conducted a survey to find the reasons people give for not wearing a helmet.

Greek riders that do wear a helmet often use a helmet that is not approved, is not the right size, or is very old. From the survey it appears that some riders (and pillions) tie the strap too tight or too loose or wear the helmet in an unorthodox way (as if it were a hat). According to the survey results, people underestimate the vital role helmets and other protective equipment can play in an accident.

With the results of this survey, Motothesis wants to formulate messages to promote helmet use, by taking away the negative image surrounding helmet usage.

For more information on the Greek study, contact Motothesis by email: info@motothesis-motoe.org 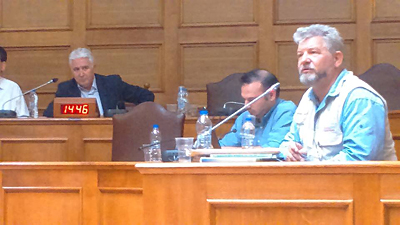 On the 26th of June, Motothesis was invited to the Special Standing Road Safety Committee of the Hellenic Parliament. There Motothesis had the chance to present its’ ideas about motorcyclists’ training and mostly the results of its’ survey on helmet use.

It was a chance to express the institutes’ ideas for the promotion of motorcyclists’ safety gear in a way that can persuade and not frighten. Motothesis believes that the general promoting, both of the helmet and the rest of the gear, has to be done in a completely different way and believes that fear can not be used as the dominant element of any road safety campaign, especially when the ‘threats’ are manmade.

The parliamentiary committee  appreciated the proposals and the representatives of Motothesis, Thomas Kakadiaris (see picture) and Evangelos Lemonidis, had the chance to answer the committee’s questions, concluding with the commitment being available for every immediate information about the issues of 2.000.000 users of PTWs in Greece.

MOT.O.E. (the Greek Motorcyclists’ Federation), with the establishment of the Institute, aspires to provide education and substantial information on motorcyclists’ issues when asked by state or private operators, but will always defend free and safe motorcycling.