In a letter to Elon Musk, founder of Tesla Motors, Norwegian FEMA member NMCU asks a very simple question: Is the Tesla ‘autopilot’ properly tested with motorcycles? The letter to Mr. Musk is a follow-up of an earlier initiative by NMCU, addressing the issue of so-called adaptive cruise control systems not being able to detect motorcycles.

The letter from NMCU to Mr. Musk reads:

The Norwegian Motorcyclists’ Union (NMCU) is the organization representing motorbike riders in Norway. NMCU is working closely with politicians and road authorities, and the Norwegian Public Roads Administration and NMCU have a joint motorcycle strategy. We believe Norway is one of the largest markets for Tesla in Europe. With a circulating park of only 2,5 million cars, the proportion (exposure) of Tesla cars on Norwegian roads are quite high, especially in the southern parts of the country.

Tesla is a wonderful car, but an accident on a Norwegian motorway this summer made us very concerned. In the accident, the motorcycle of a young, female rider was hit hard from behind by a Tesla, with its ‘autopilot’ in the ON position.

The rider survived, but she was severely injured. The accident triggered a very fundamental question: Was the Tesla ‘autopilot’ unable to detect the motorcycle in front of the car?

This accident in Norway, and news reports of Tesla ‘autopilot’ accidents from around the globe, made NMCU write a letter of concern to the Norwegian Minister of Transport. The letter says among other things that: “It is worrying if Tesla’s ‘autopilot’ is not able to detect a motorcycle, but it is even more worrying if the driver has been duped into believing that a driver assistance system is an ‘autopilot’ that allows you to cross your arms and no longer be the driver of your car.”

NMCU is certainly not against a future of autonomous vehicles, but we are a bit concerned that manufacturers and politicians are ‘over-selling’ present technology. NMCU sees many ethical, legal and traffic safety qualms when a driver assist system is marketed as an ‘autopilot’ that is actually making the car self-driving. No car on the market is self-driving, and probably will not be for many years. It is therefore a bit worrying if key people creates an impression that cars already have a functional “autopilot” and are self-driving. NMCU insists that any system being basis for the term ‘self-driving’ must be thoroughly tested with motorcyclists, cyclists and pedestrians before being put on the market. 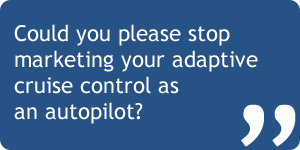 NMCU’s demand for ADAS being tested with motorcycles is confirmed in the recent study, “Preliminary Study of the Response of Forward Collision Warning Systems to Motorcycles”, by John F. Lenkeit, Terrance Smith PhD Dynamic Research. The study was presented at an international motorcycle safety conference in the city of Cologne in Germany in the beginning of October this year. The study says among other things that: “As drivers become comfortable with, and rely more on Advanced Driver Assistance Systems (ADAS), they may become less attentive to the driving task. So, an unintended consequence of broad ADAS implementation may be an increase in the frequency of car-motorcycle accidents even as car­ car accidents decrease. It is important therefore that consideration of motorcycles be included in future ADAS test procedure and equipment development, and retroactively introduced into existing ones.

Therefore, NMCU have a simple question to you Mr. Musk: Is the Tesla ‘autopilot’ properly tested with motorcycles?

Regardless of your reply to the above question, we have a request to Tesla Motors: could you please stop marketing your adaptive cruise control as an autopilot, duping Tesla owners to believe they have a self-driving car that makes it possible for them to lean back, fiddle with their iPad and stop being the responsible driver of the vehicle.

Thank you in advance for your reply and your comments.