Self-driving cars: what to think of them from the perspective of motorcycle safety? We take a closer look at the technology that is supposed to make riding safer.

It came as quite a shock to motorcycle riders reading in their newspapers: recently a driver of a Tesla on ‘autopilot’ was killed in an accident when his Tesla did not notice a truck trailer and crashed into it at full speed.  The instant question popping up in the bikers’ minds is: if the self-driving system is not seeing a big truck trailer, will it then see a motorcycle?

ITS principles
Self-driving cars are part of the wider concept of ITS, Intelligent Transport Systems. These are technological innovations designed to improve traffic safety by having road users communicate with each other as well as with the road infrastructure. In order to warn car drivers and motorcycle riders for potentially dangerous situations. Or in order to directly intervene with how the car or motorcycle is moving on the road. If the Tesla system had worked properly, it would have ‘seen’ the trailer and would have slowed the car down to a safe driving distance from the trailer. Major companies are developing self-driving cars. Not only Tesla. This year, Mercedes – under driver supervision – successfully managed to have a self-driving car drive through downtown Amsterdam. Google is working on one and found out that accidents may easily occur. Taxi company Uber is developing a car that doesn’t need a driver at all. 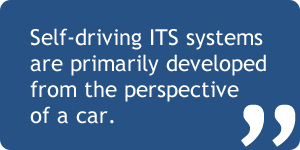 Self-driving ITS systems are primarily developed from the perspective of a car. And precisely that is of utmost concern to motorcycle riders. Is ITS also making riding a motorcycle safer or just the opposite: creating an additional danger? Every reason for FEMA and its Dutch member organization MAG to closely monitor ongoing ITS developments. FEMA and MAG are not opposed to ITS. Both organizations want to ensure that whatever ITS systems are allowed onto the European roads are also beneficial to motorcycle safety. And in doing so: both organizations listen closely to European motorcycle riders’ ideas and fears about ITS.

ITS Applications
ITS applications do not involve just one ‘i’, but three ‘i’s. They form a chronological chain of components. 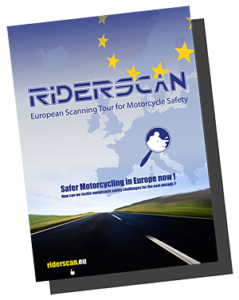 FEMA’s recent RIDERSCAN project distinguishes no less than 53 different ITS applications where all three ‘i’s are involved. A survey among about 17.000 motorcycle riders from 20 European countries measured the riders’ opinion about each of these 53 ITS applications: beneficial or dangerous for motorcycle safety?

FEMA’s 53 ITS applications fall into 9 categories:

Some of these ITS applications are already in use. Others are being tested. And again others are still on the drawing boards.

Motorcyclists about ITS
This is the European motorcycle riders’ the top-10 ITS application most beneficial for motorcycle safety:

This is the European motorcycle riders’ the top-10 ITS application most dangerous for motorcycle safety:

Examples of motorcycle ITS 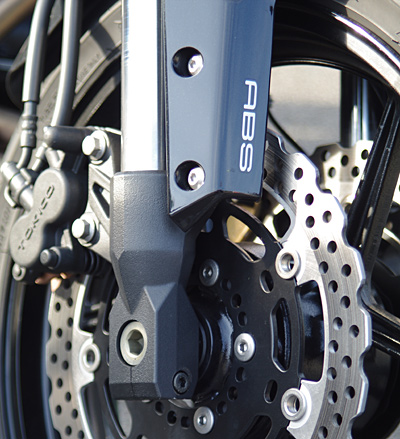 A useful and generally accepted ITS application is ABS. For an ABS motorcycle rider it is self-evident that when a powerful brake attempt is registered (the ‘i’ of intelligence), that this attempt is communicated to the ABS system (the ‘i‘ of interaction) and that subsequently ABS is automatically activated (the ‘i’ of intervention).

An example of a dangerous ITS application is when the road infrastructure decides to intervene with a motorcycle rider passing by. Sensors built into or placed alongside the road measure that the rider is exceeding the speed limit (the ‘i’ of intelligence). This speeding is immediately reported to the rider on his dashboard or by projection onto his helmet visor or wind screen (the ‘i‘ of interaction). Subsequently, ITS automatically cuts the bike’s throttle to reduce its speed (the ‘i’ of intervention).

Equally dangerous it would be when an ITS application during riding measures that the tire pressure is too low (the ‘i’ of intelligence). This low tire pressure is immediately reported to the rider on his dashboard or by projection onto his helmet visor or wind screen (the ‘i‘ of interaction). Subsequently, ITS automatically cuts the bike’s throttle forcing the rider to make a full stop (the ‘i’ of intervention).

Fear of ITS
FEMA’s RIDERSCAN survey among about 17,000 European motorcycle riders shows that they are especially afraid of two types of ITS applications:

1. ITS applications that create unexpected situations. Motorcycle riders do not want:

2. ITS applications that impact car and motorcycle driving behavior based on communication from the riding environment;

This communication is dangerous because it is unclear how car drivers and motorcycle riders will react to the sudden information they receive and automatic intervention they experience.

ITS and motorcycle accidents 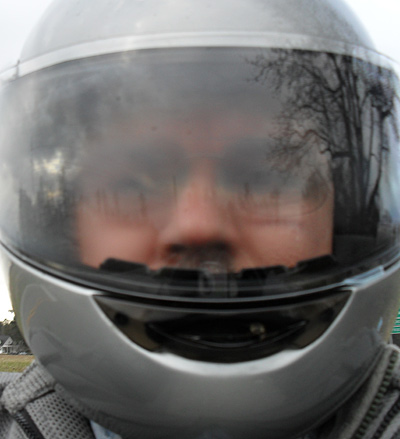 ITS has its greatest beneficial potential in preventing one-sided or single accidents in which no collision with other vehicles or road users is involved. Two major causes may easily be solved by ITS: braking errors and blocking brakes, and steering errors especially in turns. The braking problem may be addressed by three ITS applications motorcycle riders really appreciate: ABS, also functioning safely in turns, brake assist for maximum braking performance and connected brake systems that automatically activate front and rear brakes when only one is engaged. The steering problem may also be addressed by three ITS applications riders really appreciate: headlight that beams into turns, a vision-enhancing helmet (no fogging up) and vision improvement through contrast reinforcing helmet visor under bad weather conditions. Here are direct opportunities for the industry to develop and market innovative products.

In case of motorcycle accidents involving a collision, potentially beneficial ITS applications are on the drawing boards. They still require motorcycle-specific test programs before they can be classified as improvement for motorcycle safety. The most dangerous collision situations are:

This 4-point causality list defines what kinds of ITS tests are needed from the perspective of motorcycle safety. Without such tests being successful, an ITS application may not be declared safe for motorcycle safety and may not be licensed as fit for production cars.

ITS tests must unequivocally prove that the ITS applications ‘see’ motorcycles in accident risk situations a through d, under a variety of conditions at least differing in 1) speed, b) busy traffic situations and c) weather.

The idea behind ITS is that ITS applications help prevent human errors responsible for motorcycle accidents. From a policy perspective, the most difficult to answer question will be: what margin of error is acceptable for each ITS application? Because ITS application can and will fail occasionally. 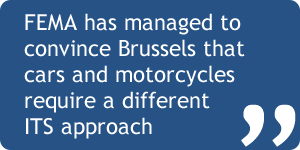 On the to-do-list remains to ensure that ITS tests for cars also involve motorcycles and specifically address the four most risky motorcycle collision situations. It must be ensured that ITS applications for self-driving cars replace the car driver in a motorcycle-safe way. Then these ITS applications can be trusted to improve and not further endanger motorcycle safety. And most important of all: the motorcycle riders must always remain in full control of his motorcycle and his own riding behavior.

This article was written by Harold de Bock, member of the board of MAG Netherlands, an FEMA member organization.