The analysis of 9,186 accidents where a motorcyclist was severely injured, shows that specifically young, male riders face a significant risk to become a road traffic victim.

The study was also directed at providing an understanding of the main circumstances and factors that affect the emergence of serious road traffic injuries, medically coded as MAIS3+, for the following road traffic modes in the European Union: pedestrians, bicyclists, motorcyclists and car occupants.

If you download the study, you will find all the data and you can read about the most common characteristics of crashes with severely injured pedestrians, bicyclists, motorcyclists and car occupants. We will now focus on the findings about motorcyclists.

In total the researchers have analysed 9,186 accidents where a motorcyclist was severely injured. They used data from nine European countries: Austria, Czech Republic, France, Germany, Italy, the Netherlands, Sweden, Spain and the United Kingdom. From these databases, we get the following picture of the most common crash characteristics and scenarios:

Motorcyclist characteristics – Severely injured motorcyclists are dominated by males (91%-96%). Most of them (95%) are the rider of the motorcycle. Dominant age groups are youngsters (18-24 years) and in Sweden, Germany, the Netherlands and the United Kingdom also middle aged adults (around 40 years old). In Germany this group of middle aged adults is the most dominant. 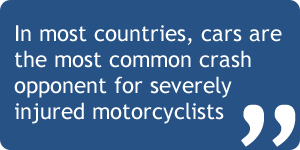 Time related characteristics – Summer and spring are the periods where high proportions of MAIS3+ motorcyclist crashes happen. As with all transport modes, crashes happen frequently in the afternoon, between 15.00h and 18.00h. 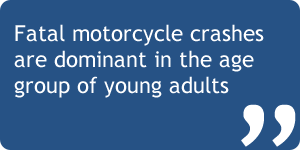 Fatal crashes – When looking at the profile of crash characteristics and scenarios that describe fatal crashes, the following findings appear:

The study was not directed at defining effective measures to prevent serious injuries, but according to the researchers “the findings provide support that a number of measures that are known to be effective for the prevention of fatal crashes could also help in reducing at least some of the serious injuries.” Examples are:

Source: Study on Serious Road Traffic Injuries in the EU, published by the European Commission, Directorate-General for Mobility and Transport.