Skip to content
You are here
Home > Blogs > How can we make our roads safer for motorcyclists?

While infrastructure should be safe for every road user, in practise it becomes clear that our roads are designed and maintained from a car drivers’ perspective. FEMA’s Dolf Willigers asks ‘How about us?’

Nowadays much of my time is spent on infrastructure. Last year I had the opportunity to attend a three-day workshop of iRAP, the international Road Assessment Program, where I gave a presentation about motorcyclists’ needs for a safe infrastructure and where I listened to many other presentations by inspirational speakers from all over the world on subjects that had to do with infrastructure and safety.

The main theme was what effects the progressing development and use of ITS (intelligent transport systems) have on our infrastructure: are safe roads still an issue when all cars drive automatically? Our conclusion was: yes, we will need safe roads in the future. An obvious conclusion for motorcyclists, but not for everyone.

The transition to automated cars will probably go very fast in the near future, but it will take a long time before all cars are replaced with self-steering ones. If that ever will happen, of course. Motorcycles last a long time and it will take at least some decades before all existing motorcycles will be replaced with new ones. With this I mean motorcycles that are fitted with all the devices that are needed to communicate with other vehicles and that are equipped with advanced rider assist systems that take over part of the motorcyclist’s riding tasks. We doubted if there ever will be only automated vehicles on the road. After all, next to long lasting motorcycles there are historic vehicles, mopeds, speed pedelecs and many other road users that are not connected. Again: we will need safe infrastructure now and in the future.

It is estimated that there are more than 300 million powered two-wheelers in the world.

While infrastructure should be safe for every road user, in practise it becomes clear that our roads are designed and maintained from a car drivers’ perspective. Which is odd, considering that in 2014 in Europe 12.5 million mopeds and 24 million motorcycles were registered. It is estimated that there are more than 300 million powered two-wheelers in the world. These are substantial numbers, so when it comes to road design, we could ask ‘how about us?’.

As riders ourselves we all know that the dynamics of motorcycles are completely different than those of cars. Besides, we have no protective cages and we have the risk of falling. This means that our needs are different from car drivers. With this in mind FEMA and the European Union Road Federation (ERF) are setting up a campaign to make our infrastructure safer for motorcycles. We will address the European Commission – in fact we were already there in Spring 2017 – the European Parliament, national road authorities and the standardization committees. 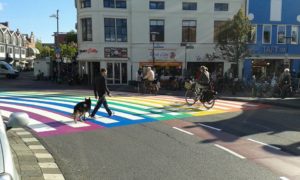 The design of the road influences our safety in two ways: badly designed roads provide a greater risk of accidents and the consequences of an accident can be more severe. The risk of having an accident becomes higher when road markings are not well applied, especially when they are designed in a way that a two-wheeled vehicle like a motorcycle cannot avoid it. Examples of these are crossings that are painted completely to be better noticed, speed limit signs that cover the whole width of the road, the so called gaybra crossing (see picture, zebra crossings with the rainbow colours painted around the white parts, meant to celebrate diversity).

Raised lane dividers are a nuisance for car drivers but can be a fatal danger for motorcyclists, as do concrete blocks that are used to protect lamp posts against the impact of cars. Obstacles near the road that block the view, both from and of the motorcycle, provide danger. Gravel from road works or from side streets are a hazard. Wide roads often have joints that are filled with bitumen: no problem for cars, a substantial problem and risk for motorcycles. Finally, I need to mention badly located and slippery manhole covers. Especially when they are not on the same level with the road surface.

Cable-barriers are the most dangerous kind of barriers.

When things have gone wrong, because of an accident of because the rider gets off the road for another reason, then the infrastructure can also be a risk. Of course the barriers: no motorcycle protection system where there should be one, for example in bends or on dangerous parts of the road. There is more to this: we all know the under-slide protection systems: extra rails or boards that are attached beneath the main rail to prevent that motorcyclists, after a fall, slide into the posts. However, nowadays we see a shift from accidents where riders fall off their bikes and slide into the barrier to accidents where the rider is still on the bike and needs protection from the topside of the barrier. 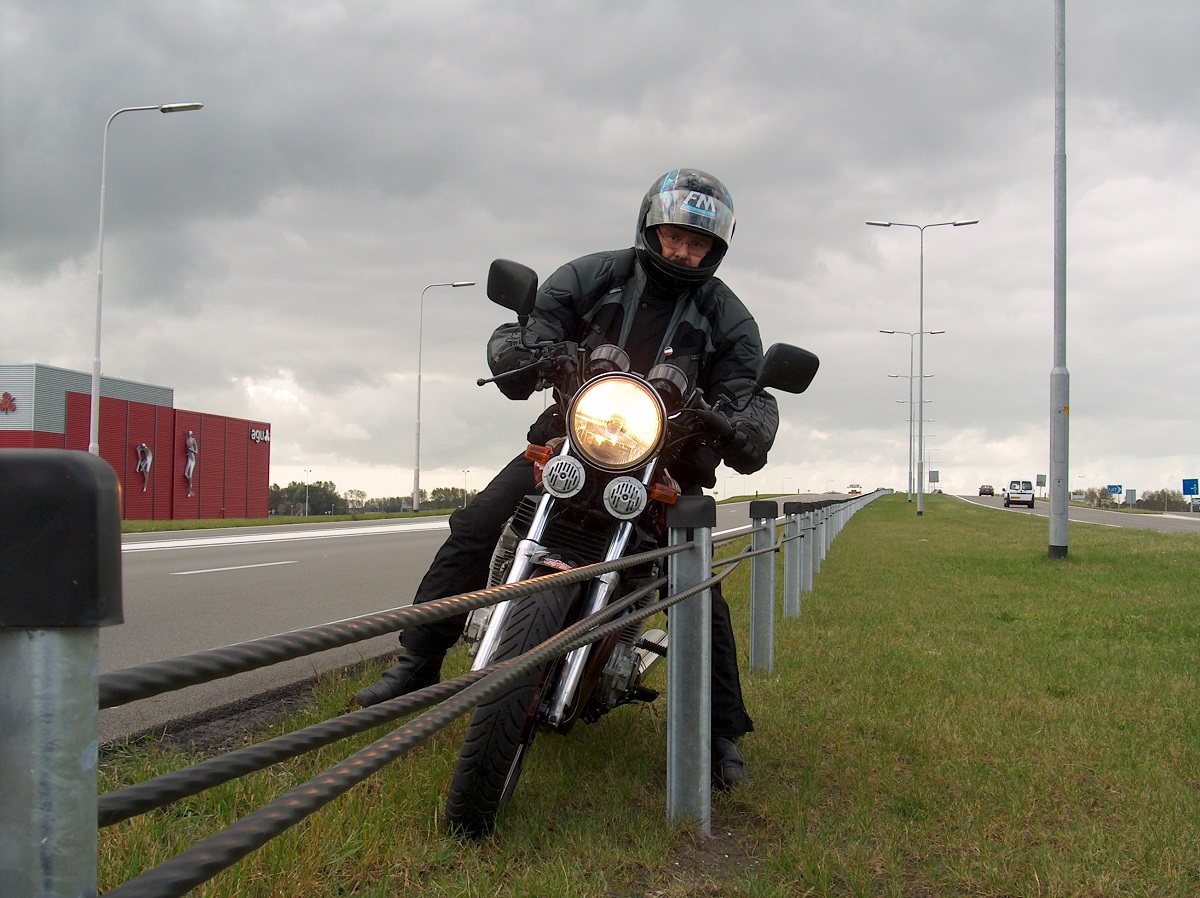 Cable-barriers are the most dangerous kind of barriers: first of all because the posts cannot be protected by a continuous protection system and secondly because the cables guide body parts that are caught in between the cable to the posts. I also need to mention that obstacles on the roadsides, especially in the outside of bends, are also a known risk that could easily be avoided: in the case of lampposts, these can without any trouble be moved from the outside of the bend to the inside. In the long run that will even save costs to the road owner.

Not only the design of the roads is an issue in road safety. Perhaps even more important is maintenance. Badly maintained roads and roadsides can be fatal. First of course the road surface itself: asphalt and concrete become more slippery during the years. The grid on the surface wears, the micro structure vanishes and the pebbles become ‘polished’. Even dry roads can get more and more slippery without being noticed. An extra unfortunate aspect is that most common ways to measure the skid resistance are designed with the dynamics of car tyres in mind. Motorcycle tyres behave different and have to deal with different forces. But it is not just the skid resistance of the road surface itself; the road markings wear in time as well and lose skid resistance. The road authorities should check them regularly and renew them in time. Next to diminished skid resistance there are potholes and tears that provide a risk, next to rutting, bitumen repairs, grid or gravel because of a worn surface et cetera.

Of course, we do not only look at the problems; we try to find and provide the road authorities and the policy makers with solutions.

In the upcoming FEMA-ERF safe infrastructure campaign we will focus on three kinds of measures. On a European level we work on safer barriers. The way we do this is to aim for real test standards instead of the current ‘technical description’, but more importantly: to have better standards with more and more realistic impact scenarios that include the topside protection, and that permit the use of biofidelic dummies instead of the more expensive (and probably less suited) hybrid dummies. Also the possibility of computer simulation and a less extensive test should be considered. This would mean lower costs which could also mean that it would be more attractive for manufacturers of guardrails to develop motorcycle protection systems.

We would like the European rules to be more focussed to motorcyclists’ needs.

In the near future the European directive on road infrastructure safety management will be reviewed. We would like to use this opportunity to have some more focus on the safety for motorcycles and especially we think that the scope of the directive must be expanded from the TEN-T roads to the comprehensive network of roads. In understandable language: we would like the present European rules concerning the most important trans-European roads to include all national (and possibly regional) roads and have them also be more focussed to motorcyclists’ needs. 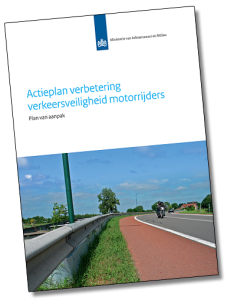 Finally, we think every country should have a national motorcycle safety improvement plan. Norway and the Netherlands already have one (in the Netherlands the government and the motorcycle world are currently working on a new version). Some other countries do refer to motorcycles in their general road safety plans, but not always with inclusion of measures to make infrastructure safer. The measures often are restricted to enforcement.

The inclusion of fitting motorcycle protection systems where necessary, good design and maintenance of the roads in such a plan and a proper execution by way of national legislation, regulation and standards would mean an enormous leap in road safety. In my view it is no coincidence that Norway and the Netherlands are among the countries in Europe with the fewest motorcyclists killed on the road. With the execution of these three measures we need no longer have to ask ‘how about us?’.