FEMA member the Motorcycle Action Group in the UK (MAG) held their biggest demonstration in years last Saturday 21 April 2018 to highlight the unfairness of a new pollution tax that London Mayor, Sadiq Khan, is threatening to introduce and which will hit some of the poorest workers in the capital.

The demonstration drew support from all elements of the riding community including dispatch riders, delivery riders, commuters and leisure bikers.

Selina Lavender, MAG’s Chair, said: “A big thank you to the MAG members who put in the hours to bring the demo together. It was great to see riders turn out in support of the event and I really enjoyed riding with you all. Hopefully Mr Khan will get the message!”

Keith Prince, Chair of the Greater London Authority Transport Committee and a motorcyclist himself, added his voice to the call for common sense: “I am disappointed that the Mayor of London has chosen to punish the most vulnerable with his ULEZ tax by again not keeping his promise to work with the motorcycling community. Ironically as a socialist, he is taxing the least well off; the low-paid essential workers and night workers who need their small-capacity bikes to get to work and cannot afford to replace them. Transport for London’s ‘Easy Rider‘ report of 2015 states ‘powered two wheelers are part of the solution’. Why, two years later, are we now part of the problem?”

MAG’s President, Ian Mutch (see picture below), summed up the campaigning commitment of MAG: “The Mayor really does need to think about motorcycling because he made many promises to us before being elected. Now we invite him to talk directly with MAG. Currently, his policies on motorcycling are counterproductive: they ignore the benefits that motorcycles of all kinds bring to the commuting mix.” 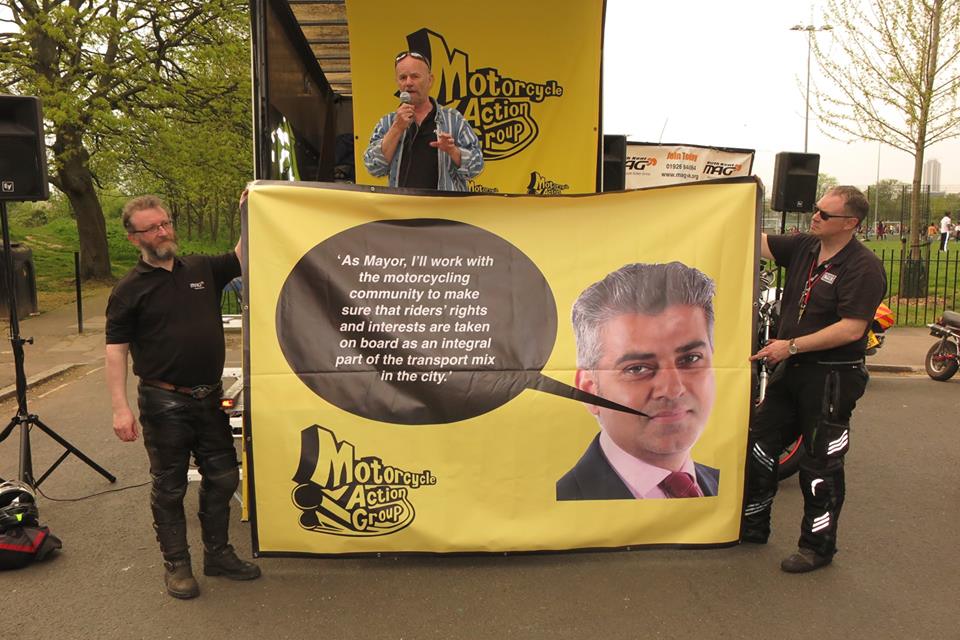 Colin Brown, MAG’s recently appointed Director of Campaigns & Political Engagement, said of the event: “This was a peaceful, good natured demonstration but there is real anger amongst bikers who don’t understand how the Mayor can think it’s fair to charge riders of old mopeds £12.50 (€14,25) a day to enter the city, while someone with a six-litre sports car gets in for free, as far as the pollution tax is concerned, if it’s a new vehicle. We believe we have a strong legal case based on discrimination. We hope it doesn’t come to that but if the Mayor is willing to damage his own reputation to defend a tax on the poor, then MAG will take him on, all the way to court if necessary.”

Watch the video below to get a great impression of the protest.