The British Motorcycle Action Group (MAG) has held a long-awaited meeting with Mayor of London, Sadiq Khan. The topics: motorcycle access to bus lanes and the threat bikers will be charged in London’s Ultra-Low Emissions Zone.

The meeting was the result of months of lobbying, and the hugely helpful intervention of Greater London Authority Assembly Member Keith Prince AM, who secured and attended the meeting. Lembit Öpik and Colin Brown from MAG’s Political Unit were also present.

Following MAG’s visit to Mayor Khan at the Greater London Authority’s headquarters in City Hall, on 27th November 2018, MAG’s London Regional Rep, Tim Fawthrop said: “It’s been a long time coming, but it was worth the wait.” 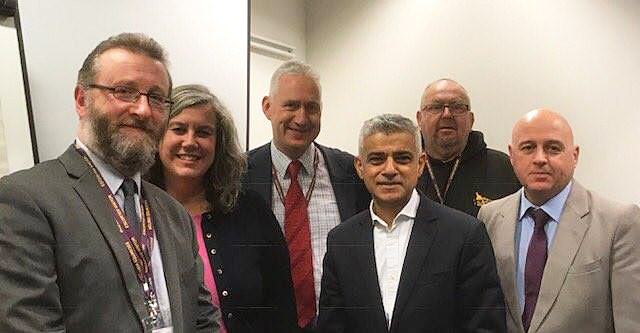 “We covered two items,” continues Tim. “One was bus lanes and the other was the threat to charge bikers in the Ultra-Low Emissions Zone (ULEZ Charge) if their motorbikes are beyond a certain age. MAG argues that this is unfair because bikes reduce congestion and pollution and make no measurable contribution to London’s emissions. I suggested that we should find a way to exempt those bikes that can be shown to have very low emissions, and the Mayor agreed to allow us to explore this further with his staff, which is a good outcome.”

The discussion on bus lanes was even more encouraging. Mr Prince, who organised the meeting, said: “Mayor Khan agreed that motorcycles should be allowed into bus lanes. He assured us that all the so-called Red Routes in London, which are directly under TfL’s control, would remain open to bikes. He also said he’ll work with MAG to encourage the London Boroughs to open their routes up too. I’m glad to see the Mayor honour the promise he made on this matter.”

Next, MAG will meet the relevant officers to explore the best way to progress both matters. MAG’s Lembit Öpik adds: “It’s a credit to the Mayor that the meeting was not just a box-ticking exercise, but a real chance to talk about our ideas and suggestions. It leaves me optimistic about Mr Khan’s attitude towards biking now, and I’m happy to say so.”