Skip to content
You are here
Home > FEMA news > ‘While carmakers suffer, motorcycles are on a roll in Europe’

Even as European auto sales decline, increasing congestion and renewed interest in two-wheel transportation have helped boost deliveries of motorcycles.

Auto sales are falling but deliveries of two-wheelers are up: ‘Younger people aren’t so interested in owning a car’ 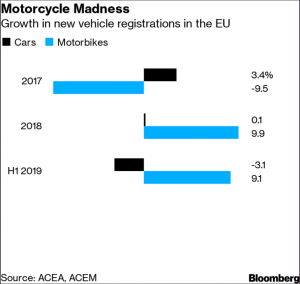 “We’re seeing two-wheelers come back as an option for commuting,” said Stefan Pierer, chief executive officer of KTM Industries AG, Europe’s largest manufacturer of big motorcycles. “Younger people aren’t so interested in owning a car, and many can’t afford one.”

Italy’s Piaggio & C. SpA, which makes Vespa scooters and Moto Guzzi and Aprilia motorcycles, says its unit sales of two-wheelers jumped 5.9% in the first half. BMW AG sold 7.3% more motorbikes in the seven months through July, while its auto deliveries climbed just 0.9%.

BMW’s Harald Krueger: ‘“Even with an electric car, you can sit in a traffic jam, so electric motorcycles are important for us’

Much of the growth in two-wheelers is coming in electric models. Across Europe, sales of e-motorcycles and scooters jumped 77% in the first half, to 34,000. “Even with an electric car, you can sit in a traffic jam in a city like Paris or Rome, so electric motorcycles are important for us,” BMW then-CEO Harald Krueger told analysts on August 1.

KTM is developing a low-voltage platform for smaller electric motorbikes in India with partner Bajaj Auto Ltd., with the first models coming to market at the end of 2021. Pierer said he’ll invite European manufacturers such as Piaggio and Volkswagen AG’s Ducati to join that project to share costs. KTM also expects to sell some 65,000 electric bicycles this year, a figure that Pierer predicts will approach 100,000 by 2021 as the company initiates sales in Australia and the U.S.