It is not dangerous to ride a motorcycle if you do everything right, but it will never become risk free. But if you choose to ride a motorcycle without a valid A license, without personal protection and/or under the influence of drugs and alcohol, you dramatically increase the risk of an accident.

Statistics from the Swedish Motorcyclists Association, SMC, show that the rider didn’t have a valid A license in a third of all fatalities. The high share gives Sweden a place at the bottom in Europe. The serious traffic crimes that lead to fatalities and severely injured must be made visible. At the same time there is a need for more police in Swedish traffic, stricter laws and a new way of thinking to stop serious traffic crimes in traffic.

The motorcycle season is coming to an end in Sweden. The fatality numbers are lower compared to the last years and have been reduced with almost 40 percent compared to 2018. To SMC it is obvious that the safety culture that we have created among Swedish riders through information, advanced training and advocacy together with other stake holders in the motorcycle community have been crucial for safety.

When you ask a motorcyclist where their safety consciousness was formed, the reply is: within the motorcycle community. Friends, the motorcycle club, motorcycle magazines, social media and forums are the most important factors. Swedish riders demand and buy road safety for huge amounts every year. Motorcyclists are no different to other road users, we want to come home to those we love, says Jesper Christensen, general secretary at SMC. 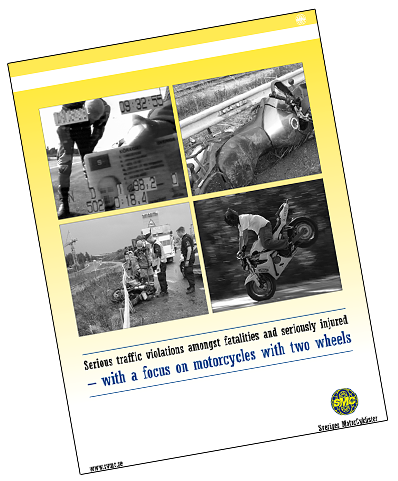 There is however a growing group that are impossible to reach with traditional road safety work – the ones without a valid license. Their share is growing and they are now one third of all fatal accident on a motorcycle in Sweden. SMC just published and translated a report where fatal accidents 2011-2018 are analysed from the basis if they had a motorcycle license or not. The report shows that the riders didn’t have a valid license in 32 percent of the fatalities. The in-depth studies of this group clearly show that this group expose themselves to enormous risks that led to the fatal accident. Only about half of them owned the bike they were riding. In 77 percent of the accidents with riders without a license, the bike was unregistered/stolen/not allowed in traffic/banned to use, thus not allowed to use at all. Last but not least, three out of four of the killed riders without a license were drunk or/and under the influence of illegal drugs. In the report from SMC they also show that this is a huge problem among the riders that are severely injured. Only two out of three had a valid A license.

These persons aren’t motorcyclists, they have neither an A license nor own a bike allowed to use in traffic. To reach and stop these riders, we have to start thinking in new ways in road safety work. We need more police, not more speed cameras. The police need tools to take care of the repeat offenders, for example take their vehicle. Repeat crimes must not lead to a discount of the punishment. Warning bells should go off when people without valid licenses buy vehicles and then stop paying tax and insurance. SMC also ask our members to think one more time before they someone else borrow their bike and lock and store the bike in a safe way and place, says Jesper Christensen.

Today all Swedish resources in road safety are spent on lower speed limits, more speed cameras and more median barriers. These are not the right measures to lower fatalities among motorcyclists, states Jesper.